To honor the 20th anniversary of the 9/11 attacks on our nation, FFP is proud to share some reflections on how that terrible day helped spur a pro bono financial planning tradition that has since grown and flourished. As we remember the victims of 9/11, we also thank the many advisors who stepped up in the days after the tragic events to assist their family members, first responders, and others who needed financial guidance and planning. This is just one perspective of the many advisors who, supported by FFP and FPA®, answered the call to help – and to this day continue to dedicate their time and talent to so many Americans in crisis or need.

How a Tragic Day Fueled a Pro Bono Movement

Mark is a financial advisor based in the Washington, D.C. area, who was involved in efforts to help 9/11 victims in D.C. and nationally.

September 11, 2001
9/11 was one of those days that if you are old enough to remember, you immediately recall where you were when you first heard about the systematic attacks on the World Trade Center, the Pentagon, and the crash of another plane in Shanksville, Pennsylvania.  Most remember the shock, horror, and fear that terrorists brought to America that day. For many, the reminders persist.

Friday evening, September 21, 2001
Ten days later, the paralysis that had gripped a mourning and still fearful nation began to lift. Amidst a backdrop of renewed patriotism, it seemed everyone was looking for ways to help the victims and their families, including myself and hundreds of other members of the Financial Planning Association® (FPA®).

My City of Ruins. After a dramatic pause, the darkened television screen came to life. Bruce Springsteen appeared, sitting alone, eerily playing his acoustic guitar and singing a song that captured what most felt. Multiple artists followed during a quickly assembled nationally televised benefit concert that raised money for the 9/11 victims. It seemed all of America wanted to help their countrymen in need.

It was during this concert that emotion turned to inspiration and while the bands played on, I sat at my computer and started crafting a possible framework for an FPA® pro bono program, designed to help 9/11 families. Looking back, crafting the offering was probably the easiest part. I later became aware that while my idea was taking shape, FPA of Metro New York members and other leaders were following a similar path. But there was much work to be done.

Turning idea to action
By Monday, I had concerns that the idea conceived a few nights prior would be no more than thoughts on a computer screen. However, with the help of the FPA® National Board and staff, the notion of a formal program for victims and their families was eventually brought to life.

Given the large number of CFP® professionals offering pro bono guidance today, it is hard to believe that prior to 9/11, pro bono financial planning was merely an aspiration. Pro bono had been recognized as an important service provided by traditional professions but hadn’t yet emerged for financial planning for several reasons, including a lack of public awareness of financial planning and trust in the financial services industry overall.

FPA® staff played a critical role in drawing up a plan to operationalize the pro bono offering for victims. In addition to staff, FPA® members, mostly in the areas most affected by the attacks, worked on how best to implement the program. Once a final framework was created, the next big issue was how to reach people with great need of the pro bono services. Today, that would be easily solved by social media, but in 2001, newspapers and radio/television still ruled. Despite the fact this effort would be a public service, funds would still be needed to purchase high-impact advertising.

Given the mission of the Foundation for Financial Planning (FFP) – which had been established just years earlier to advance pro bono financial guidance for people in need – we hoped for alignment with this effort and ultimately decided that we should ask for their support. At the time, FFP’s leadership included representatives from both Washington, D.C. and New York City, and it did not take long for a decision. Funds would be provided to purchase a full-page ad in both The New York Times and Washington Post announcing FPA’s pro bono efforts to help 9/11 victims and families. 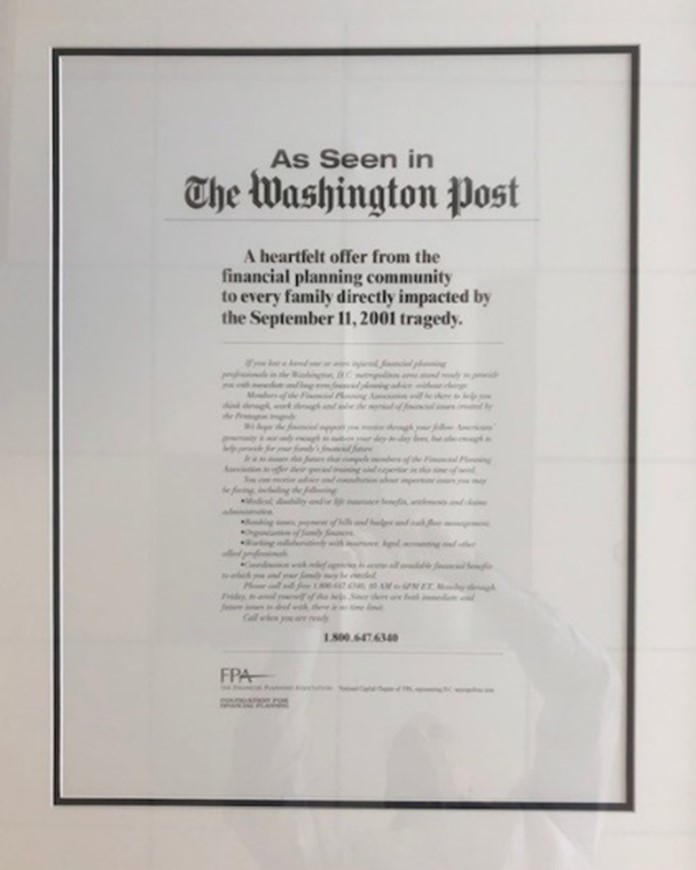 A copy of the full-page ad offering pro bono financial planning services that FPA® ran in the Washington Post. This ad and others were funded by FFP.

The indelible impact
FFP’s willingness to support a quickly evolving idea spurred the further development of the profession’s pro bono tradition. And though many challenges existed beyond sharing the message, without the support of FFP leadership during that trying time, pro bono may not have developed to the point where it is today.

As the days, weeks, and months passed, the program was launched, refined, and delivered to those requesting financial planning help. The law and accounting professions had established pro bono services and separately developed 9/11 programs of their own. It didn’t matter that we were the new kids on the block. With the support of FFP, and the drive of CFP® professionals, FPA® Board and staff, a movement was born in our community that has positively impacted many individuals and families.

On reflection, our profession’s desire to help produced an unintentional outcome. The pro bono program surrounding 9/11 generated further legitimacy of the Financial Planning Profession in the eyes of the public, policy makers, and other public advocacy groups, and helped foster the tremendous growth and recognition that exists today.