After working hard to build a future as small business owners of a smoothie café franchise, Amey and her husband were devastated when the franchise failed, forcing them to file for bankruptcy. Left with a $25,000 tax bill, Amey’s husband began driving for Uber, and their family managed to make ends meet.

But in 2019, they began to hit more financial roadblocks. Amey’s husband underwent major heart surgery and had to stop working during his recovery. Then, in early 2020, Amey’s mother became ill, prompting endless hospital visits and tests. Amey quickly found her family with reduced income and a growing pile of medical bills.

Then, the COVID-19 pandemic hit. Amey’s husband, who had fully recovered from his surgery but was still considered high-risk, had to rethink his plans to start driving for Uber again. The family continued to rely on Amey’s sole income but finding that their expenses surpassed their income each month, they were unable to pay all of their bills. Eventually, their landlord threatened to evict them as they were unable to pay rent. 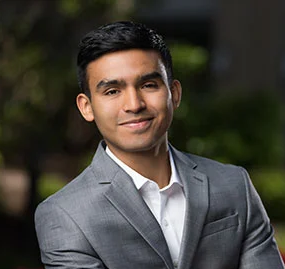 Realizing that her family was in trouble, Amey reached out to FFP grantee Britepaths and inquired about their Financial Empowerment Center. After reviewing Amey’s situation, Britepaths placed her in their financial mentoring program and paired her with Dennis Elias, a CFP® volunteer.

Amey and Dennis began meeting weekly to go over her financial situation. As her family was on the brink of eviction, the top priority was figuring out how to cover rent. Dennis referred Amey to her county’s rental assistance program, and after applying, Amey received 3.5 months in total rental assistance. Once that immediate need of shelter was covered, Dennis and Amey then turned to topics  including budgeting, managing cash flow, and developing a debt repayment plan. Amey and her family did not have a budget in place and at one point were skipping meals in order to pay the bills. Dennis helped Amey figure out a budget that would cover their expenses, and find food assistance programs to help put food on the table when money was tight. Dennis and Amey made savings and debt repayment a part of the family’s budget so they could start paying down the tax bill, hospital bills, and other debt and to start saving for the future.

Today, Amey and her family are well on their way to financial stability. Her husband has been able to return to work and supplement the household income. While they still have some debt left, Amey and her family were able to pay off almost $6,000 of debt over the course of a year by sticking to their budget. Amey also enrolled in Britepaths’ match savings account, began saving consistently and today has $500 in savings, which for her “is a dream, especially considering that [my family’s] expenses often exceed our income.” They hope to eventually start saving for a home. Amey is so grateful for the help she received from both Britepaths and Dennis. She says, “Britepaths saved my life. Last year was a disaster and I really want to thank Dennis. He taught me how to spend what money we have in the right way.” She hopes that others who find themselves in a tough financial situation seek help as well. “Don’t be ashamed to find someone to help you. Their help will give you hope to do better in the future and you’ll feel the success in yourself, your family, and your life.”

Dennis hopes that other financial planners will answer the call to volunteer. “You’re giving back to the community at a time when a lot of people need it the most.”

“Britepaths saved my life. Last year was a disaster and I really want to thank Dennis. He taught me how to spend what money we have in the right way.”
–Amey